kartikeya200 has not added any external profiles yet.

kartikeya200 is not following anybody.

Fully agreed, thanks for the addendum.

Man, I completely forgot the Reckoning was right after His Way. I thought I had a few more days. WELP.

Okay, so I really do love this episode, hokey special effects and all. And I think this episode highlights a major reason why I'm a huge Odo/Kira fan (I can actually say that without ROT13, it exists, yesss). In short, it's one of the healthiest and most respectful relationships I saw growing up. Of course there are issues, both in presentation and between the two, but for the most part I really do like what the writers try to do with them.

In a way, this episode is a refutation of old!Odo from Children of Time. Sure, the stakes aren't nearly so high on either side (Kira's in danger, but not guaranteed to die, Bajor's future might be in danger, but it's not a sure thing that the whole planet will be wiped out), but it's a similar enough situation as far as Odo and Kira are concerned that I still find myself comparing the two.

old!Odo couldn't accept Kira dying, even when that was her express desire. He instead made a horrifying decision out of selfishness (however understandable that selfishness might have been, given his situation, dude did one of the worst things we've seen onscreen in this show). He knew she did not want to live if it meant wiping out the existence of a whole planetful of people, and he made that decision for her.

In the Reckoning, our Odo still knows Kira well enough to know exactly what she prefers in this situation; her religion is extraordinarily important to her, she volunteered to be the Prophet's 'vessel', she's willing to take a huge personal risk in the service of this, and she would not want it to be interfered with for the sake of her safety. Notably, Odo is decidedly non-religious, despite growing up on Bajor. He understands the role it plays in the culture he grew up in, but he's not invested in it, he doesn't participate in it, and he's never pretended that it really means anything to him personally. He doesn't have Kira's faith, and he recognizes this. But he doesn't think less of her because of it, and when it comes to what she wants in a decidedly religious context, he supports her.

And when it directly threatens her life and the relationship with her that they've only just formed, Odo not only doesn't interfere, he argues on Kira's behalf. It's not like it's easy for him. Just look at those last few seconds he lingers on the Promenade. But I've seen so many shows where the opposite would happen, with far less at stake, and it's portrayed as romantic. I like this development because it suggests that whatever potential there was for Odo to become the man we saw in Children of Time, he seems to have learned from it, hopefully grown past it. Real love is respect for the desires of the person you love, even if that comes at the expense of what you personally want.

I have so many feelings about this episode but I'm still behind in my rewatch and I think a lot of my words should wait until next season anyway, so for this comment, let's revisit a certain episode from about half a season back.

Sisko starts having prophetic visions and basically finds Bajoran Atlantis (well, it's not actually under water, but shut up). He has a vision that he's standing in the city square with a bunch of Bajorans and they see the sky fill up with locusts. They're afraid, but then the locusts move on to Cardassia. Sisko isn't sure what this means, but he's absolutely certain it means something, and there's more to it. That episode's climax has a practically delirious Sisko run into and utterly disrupt the ceremony of Bajor joining the Federation by claiming that Bajor can't join, "it's too soon". He says that if they join, the locusts, instead of moving on to Cardassia, will instead destroy Bajor. As a result, Bajor decides not to join the Federation (at least not yet).

They say a picture is worth a thousand words. 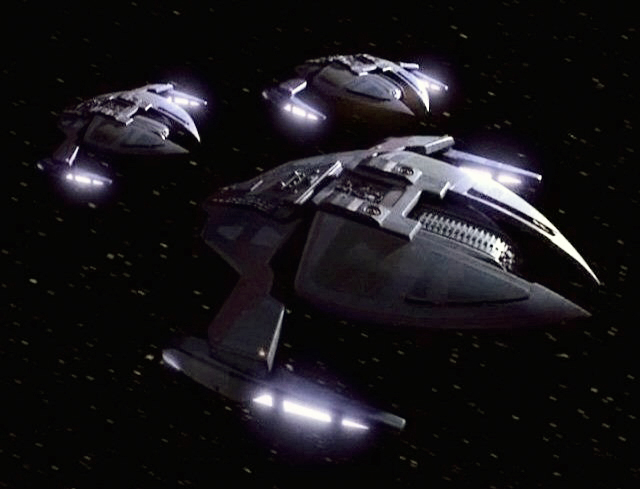 Last episode Kai Winn comes to Sisko with the information that the Dominion has offered a non-aggression pact to Bajor, and in this episode he tells her to sign it, so that Bajor can be kept out of the fighting. If Bajor was the newest member of the Federation, this would not be remotely possible. In fact, not only would Bajor be re-occupied in the worst possible way by the Cardassians AND the Dominion as of this episode, it's entirely possible they would be made an example of. We've seen what the Dominion does to those who defy them, and of course Bajor would fight (and the Dominion knows they would, they determined that all the way back in The Search with the fake simulation Sisko and the others were put through).

None of this is to say things aren't going to get ugly anyway (Dukat back on the station? Agggh), but for the moment, at least, Bajor itself is far, far safer than it would have been if it weren't for Sisko basically tanking his original Starfleet assignment.

I think it's because they're both big on the truth. old!Odo has not changed in great ways, but he's still Odo. He did an awful thing, and he wanted Kira to know he did it. Neither Odo would have thought she'd like that, or that it would somehow do anything but further torpedo any potential for a relationship (or for that matter, their friendship).

Having Kira know that is really painful, but at the same time, given the choice, Kira would want to know. It's an interesting decision given old!Odo is ignoring the OTHER thing she wanted at the exact same time.

Alas, our!Odo didn't have the chance, from my understanding. I'm pretty sure old!Odo just went to the container he was in and stuck in his hand.

I love that Kira doesn't jump into his arms. I love that she's rightfully angry. I love that she's willing to die for a bunch of people she doesn't even know, and that she's the first one who argues for the sake of those people surviving. It's not like Kira doesn't want to live, or hasn't fought to live her whole life, but she considers this more important. So many other TV shows would have had them making out as soon as old!Odo said he loved her. And I love that old!Odo specifically says he's not expecting that or anything in return.

I love that the end of this episode is such a heart-breaking mess.

I'm talking about old!Odo today, so strap in!

Something the creators bring up in extras is that they weren't really able to fit in just how Odo's been living these past hundreds of years; but knowing that goes a pretty long way to explaining old!Odo's behavior. He's basically been hermiting on his own. He doesn't live in the village, he obviously isn't hanging out with the Klingons. He's alone in a very particular way; not only the only one of his species, not only the only surviving member of the original crew (Dax is, after all, a legacy character...two hundred years later, that's not the same Dax, even though he has all the memories), but also completely apart, almost certainly due to his own choices, from every other person on that planet. The only person we even see him interact with from the DS9 crew is Kira..and the reason for that becomes pretty clear. He loves her, still, and he's spent the past two hundred years mourning her death and knowing that eventually she's going to show up again. He's become obsessive; not in a pushy, stalkery sort of way, but in a way that makes it impossible for him to live with the idea of her dying again, even if the cost is astronomical.

There's more that we can surmise. Throughout their time on the planet, our Odo is trapped in his liquid form, unable to interact with anyone (except, of course, with himself...that's got to have been strange and distressing). We have no idea how long old!Odo was stuck like that, as all he says is he figured out how to get around that problem 'a long time ago'. Kira dies within a matter of...weeks, I believe? I haven't been able to rewatch this yet. It's very possible, in fact almost certain, that old!Odo wasn't able to take physical form again until after she'd died, probably long after. He had no closure, and no ability to tell her his big secret, for two hundred years, so the very first thing he does is drop that revelation bomb. Not exactly the best or most considerate way to reunite, but if you've been waiting two hundred years to say something, you're probably going to say it as soon as you can.

This all ends in him doing something horrible. Practically unthinkable given what we know of Odo. He erases not only himself, not only thousands of people, but every single person who has lived and died in that intervening 200 years. This is a guy who has tried his hardest not to kill anyone or anything. He was so upset when it happened by accident (and that it happened to one of his own people) that he didn't speak the entire trip back, which was at least a few days. old!Odo commits an atrocity because he can't stand the thought of Kira dying again, because his love has become obsessive and because he's, whatever mitigating circumstances have led to this, putting his own wants ahead of hers--not necessarily the want of a relationship (really, I'm fairly sure he figured it was never going to happen since he made sure she would know he was responsible) but the want of her surviving, even if it's at the expense of so many people. The want to avoid that kind of pain.