Cheoaje has not added any external profiles yet.

Cheoaje is not following anybody.

I don't know if it was just me but I couldn't log in for quite some time. So now I sound like a cranky brat on the last day but I couldn't be a downer earlier.

Anyway, I didn't like this trilogy. I really struggled to get into the first one but it did grow on me. And I hated the 2nd one. But I figured I was almost through it and maybe I'd like the 3rd and I didn't.

She's a great writer, but the story and technique just wasn't what I needed. Oh well.

I hate present tense. I hate second person. I HATE fantasy that gets caught up in its own terminology and you spend too much time trying to understand what's going on. I'm trying to not give up on this book, but I'm struggling and the sudden violence in this chapter didn't help. I mean, I can handle it in general, but it's already a lot on me that it feels very much like pushing me to my breaking point of "ok, I give up."

Like I can get past any of the things I hate, but it's a lot all together.

It's a shame too because I can see the writing is really good outside of style preferences. I think the story is going to ultimately develop in a great way. But it's a journey, not the destination, and I am spending the entire time going "What the fuck is going on?" and not in a good way.

I have read the book before, but last night I was weeping again. It didn't help that I was rewatching a show that also featured an untimely grandmotherly death. With current events, it seems extra poignant and important to remember older people aren't expendable and have intrinsic value as much as anyone else. The subtext with Pterry's death was just salt on the wound. I still have a good sniffle over him from time to time (I cried for days when he died). It's amazing how these books sometimes just sync up with life in a way to make the impact so much more.

I remember posting back when I first finished it that I sobbed over the ending, not because of its contents but just seeing the words "The End" and knowing that was the last thing he had written. I'm going through his non-DW stuff (still hoping we can do Bromeliad here some day!) so I'm not out of Pterry that's new to me, but DW is something special.

Well. I’m not happy a bunch of you are like me, but I do feel better if it’s not just me. Saying I don’t love these last few sometimes feels like dishonoring his memory.

I don't know if it's all that's going on or what, but I am not getting into this book. I didn't get into the last Science book either. Is it the real world stuff? Is my brain broken? Or are they just the weakest of the Pterry stuff?

It's probably a mix of all of that. I'm having trouble reading other things, but MORE trouble with this book. And I don't remember particularly liking the last one very much.

I think I said this during Science III but I am just not getting into it these books this reread. Maybe I got less smart in the few years since I read them.

I just finished reading How To by xkcd's Randall Munroe. He's a huge Pterry fan and in the chapter on how to make friends, he talks about finding something to talk about with someone and listening to them with the accompanying cartoon, which I heartily endorse and hope we read here. 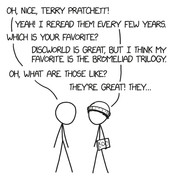 I love my tween very, very much, but I also "die" like Vimes did when the daily school drama is explained to me in detail. Not in a logical, consistent order. But copious, excessive even, detail.

Is no one else thinking of My Cousin Vinny when Vinny can't sleep in the quiet town (or quiet when the train isn't running...) but sleeps like a baby when he gets thrown in jail for contempt?

It's been a few weeks and I'm still mad. I'm so mad that I'm not sure I will want to watch the first three seasons/movie/read the two books again. It was all for this? FOR THIS?

I get RT wanted Veronica to be free and that sets up the S5 he says he wants (V being like a roving, freelance PI outside of Neptune), but... they couldn't just have broken up? Couldn't have left him lingering in a coma and she goes off to find herself instead of waiting by his side? Couldn't have sent him back on some Naval mission? FFS it was bad writing. I don't need LoVe but I don't need Writer's Agenda either.

The show was watchable with Veronica and Logan in it NOT as a couple (well, less so S3, but overall...). You don't have to kill him to make them not be together and have a show that's good.

I don't trust RT to tell stories anymore. I don't want to watch something and be at the mercy of a writer (or exec producer, to be fair) who just wants to be SHOCKING.
« Previous123456...29Next »